“Ah, music… A magic far beyond all we do here!” – Albus Dumbledore 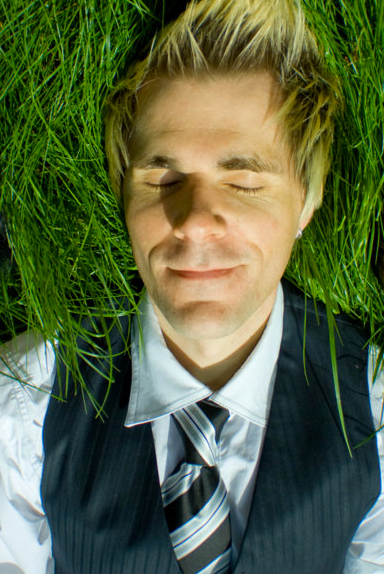 “Music is the strongest form of magic.” – Marilyn Manson

I was raised by a banker and a magician. I’m completely serious. I was the comic foil in Dad’s magic act, the kid with the funny hair who just couldn’t separate those mysterious (and infuriating) linking rings. It’s a funny image, but the metaphor stings. I still can’t unlink those stupid rings. My sister inherited a head for numbers and academic drive; I got wanderlust and an unquenchable creative thirst. For me, it all started with music. By age five I was turning everything into a microphone – crayons, jump ropes, toilet plungers. I spent my early teenage years shut up in my bedroom learning Nirvana and Oingo Boingo songs on my father’s acoustic guitar, and then I wrote a few dozen of my own (I think the first one was mostly me singing the F word over the chord progression to R.E.M.’s “Country Feedback.”) Then came acting. For an ambitious sixteen-year-old with a supportive dad, it was a short leap from community theater to The Wonder Years and beyond. I even did a few indie features. And then I quit all that to form a rock band.

7k released three albums, toured the US twice and played for thousands of people. Those years were among the most exciting and gratifying of my life. Along the way, I fell madly in love (for the second time) with my college sweetheart, and we got married. The touring life took its toll. Being away from my wife for two straight months proved to be too much – and, if the band got lucky, it would only get worse. The next step would be a solid year of touring. So, 7k broke up. That was almost two years ago. Until that cold Saturday morning in February of 2011, I’d been “band guy” for over ten years. It was my hair cut, my style, my identity. When that era came to a close, I didn’t know what to do with myself. I didn’t know who to be. In desperation, I reached for the only thing that has always managed to save me: a blank page. I wrote down all the things I’d ever wanted to be when I grew up: Rock star? Check. Actor? Check. Director of Sales & Marketing? Check. (Okay that wasn’t on the original list.) Astronaut? No check. I really did think about this for a few minutes before I realized there would be way too much math involved and crossed it off the list. Last item: Novelist. No check. Novelist? I was totally surprised to see that word scribbled across the page. I’d never written anything longer than 1500 words in my life, and that was in 1993. Write a whole book? Ridiculous. No way. Cue that little voice in the back of my head: CHALLENGE ACCEPTED. A month later, I finished my first novel. It was a steaming pile, but I’ll be damned if there weren’t a few good parts! I put the novel aside, wrote a couple of short stories, and then on September the first, just as the Hogwarts Express was pulling away from platform 9 ¾, I dove into an even more ambitious project: a 170,000-word fantasy epic. It was Christmas Eve when, thrilled and exhausted, I typed “THE END” on my second novel. A month later, I brewed myself a cup of the most pretentious tea I could find at Trader Joe’s and curled up to read my opus. It, too, was a steaming pile; but this time there were A LOT of good parts. I’d say twenty percent of that manuscript was pretty compelling! Revising the other eighty proved too daunting a task, however, so I boxed up the manuscript and stuffed it back in the drawer. But never mind that; I felt alive, and I wanted to keep writing. Fast forward ten months. I’ve finished a new manuscript: a dystopian fantasy (think 1984 meets Stand By Me) aimed at a young adult audience. I attend a writer’s conference and pitch it to two different literary agents. Both ask me to send the first 50 pages. Holy crap. Now I have to write a second draft! The problem, I tell myself, is that I’m not writer. Not really. I was an actor for awhile, and quit that, and then I was in a rock band, and I quit that too. I now have tattoos to go with the funny hair, but I don’t have the secret to making something great. I’m just the magician’s assistant.

One of my mentors, Barbara Deutsch, told me that in order to evolve as a artist, I’d have to make the ceiling the floor. In other words, rather than defining myself by all the things I’ve done, rather than looking to who I’ve been in the past as a limit to who I might become – I need to stand on top of the past. Use it as a platform on which to build my new life. Make the ceiling the floor. I believed I was a failed actor turned failed musician, groping in the dark for the next thing to fail at. But that isn’t true at all. Who I am (holy crap I’m about to declare this on the internet) is an author. An author with amazing and unique life experiences to write from. It’s taken me almost two years to reinvent myself. This blog is my coming out. This blog is my new creative home; an outlet where I can interact with friends and fans while I’m locked away in the attic working on my novel. It’s a place where all my favored forms of self-expression – writing, performing, making videos, creating music – can come together. I’ll be blogging about music, reviewing books, hosting interviews with artists, creating short videos. Christopher Walken may even make an appearance; you never know when he might want to stop by and share his famous quinoa salad recipe, sing a Gotye cover, or recite his favorite Taylor Swift lyrics. Rock Paper Life will bring you unusual top ten lists, pictures of me holding miniature things, confessions, and new ideas. My intent: to make you laugh, or wonder. To move you. Thank you for taking the time to read this. Of all the pages on the interwebs, I am thrilled you chose to spend your time on mine. I hope you’ll return, subscribe, and comment. You can interact via Facebook, tumblr, and twitter. I look forward to watching this space take shape with you. Together, maybe we can get those damn rings apart.