RPL’s Top 10 Songs for the Apocalypse 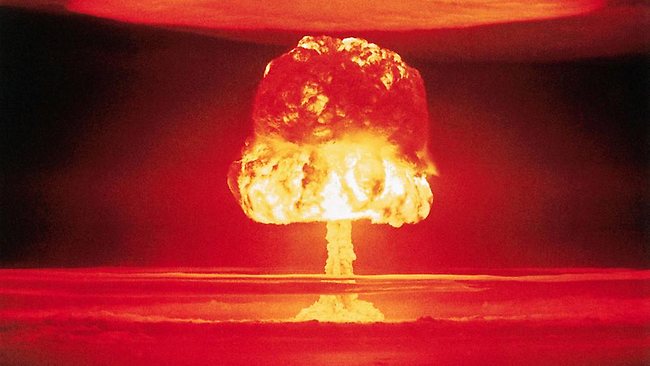 Maybe the Mayan apocalypse is a joke. Maybe it really is just another Y2K, and we have nothing to fear. But, just in case, I’ve carefully selected ten songs to help you mourn (or celebrate) the end of the world. And, by request of my good friend and fellow blogger Dean, this week, the Rock Paper Life Top Ten Tuesday list is in traditional reverse-order. (Click here or scroll to the bottom to listen to the whole list on Spotify.)

Anyone can write an aggressive rock song about the Apocalypse; it takes true artistic genius to write a Christmas song about it. But that’s what Al does; he takes the terrifying and the jolly and combines them into satirical gold.

[youtube http://www.youtube.com/watch?v=t039p6xqutU]
Everywhere the atom bombs are dropping
It’s the end of all humanity
No more time for last-minute shopping
It’s time to face your final destiny

I’m aware that, by including my own band in this Top Ten, I’m removing all doubt about the enormity of my ego. (Was there any doubt to begin with? Don’t answer that.) It’s an endearing little rock ballad about a band who survive the apocalypse. Don’t worry; there’s a happy ending.

When this song hit, I had no idea what it was about. And yet, like some kind of post-modern, German Nostradamus, Nena predicted Y2K, Occupy Wall Street and the J.J. Abrams Star Trek remake in a single stroke. And say what you will about silly 80s pop, this song is full of poetry and poignancy.

[youtube http://www.youtube.com/watch?v=14IRDDnEPR4]
If I could find a souvenir
Just to prove the world was here
And here is a red balloon
I think of you and let it go

Billy Joel is a New Yorker to the bone, so naturally his depiction of The End takes place in the five boroughs. But when you consider what America’s grandest city has endured in the last eleven years – 9/11, Occupy Wall Street, Hurricane Sandy – this song takes on an urgency Joel couldn’t have intended when he wrote it. How do you define The End? And when does it begin – or has it already?

I’ve seen the lights go out on Broadway
I watched the mighty skyline fall.
The boats were waiting at the Battery
The union went on strike
They never sailed at all

Its sauntering, optimistic beat makes the lyrical bent of “Bad Moon Rising” even more ominous by comparison. Singing about earthquakes, lightning, and taking an eye for an eye, Fogerty employs his gruff tenor to evoke a conclusion of biblical proportions, all in just 2:19.

Danny Elfman is famous for his macabre lyrics, and “Just Another Day” has some of his best. But it’s Elfman’s unexpected romantic turn that sets this song apart:I will not fall in love / I cannot risk the bet / ‘Cause hearts are fragile toys / so easy to forget. When the last day comes, there will be fire, of course, and zombies – but there will also be broken hearts.

Perhaps the most disturbing track on this list, “Idioteque” paints a dripping, dystopian watercolor portrait of a profiteering society happily texting their way into extinction.

Muse are known as purveyors of fine modern rock and science fiction, but with their latest album, The 2nd Law, the UK power trio ditch the fiction and opt for a scientifically sound, symphonic/dubstep cautionary concept record. “The 2nd Law: Unsustainable” is the first of two title tracks, and represents the spirit of the album.

Prince’s song sold more copies than the others on this list. That’s because while Muse is measuring the CO2 levels in the atmosphere and the members of 7k are contemplating the ruins of their hometown, Prince will be getting laid in a giant purple limousine (with a hot tub) and he wants you to hop in.

I was dreamin when I wrote this
So sue me if I go 2 fast
But life is just a party, and parties weren’t meant 2 last
War is all around us, my mind says prepare 2 fight
So if I gotta die Im gonna listen 2 my body tonight

I’m not sure what the point of R.E.M.’s stream-of-consciousness opus is. I’m not even sure if there is a point. Maybe that’s the point. Is it apathy? Is that what Stipe means by “I feel fine”? Or, is the question an expression of wonder at the implacable resilience of the human spirit? That, even when it’s all crashing down, the human spirit finds something to celebrate? I choose to believe the latter, and that’s why “It’s The End of the World As We Know It (And I Feel Fine)” is my number one.