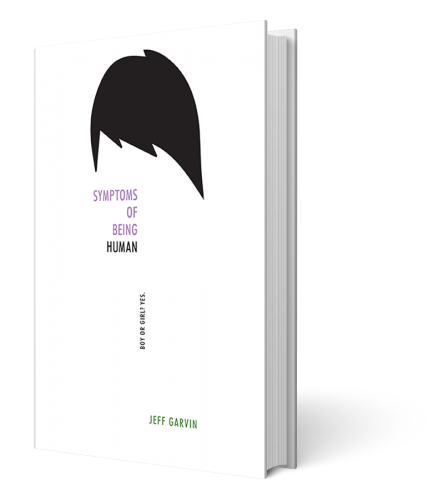 SYMPTOMS OF BEING HUMAN

The first thing you’re going to want to know about me is: Am I a boy, or am I a girl?

Riley Cavanaugh is many things: Punk rock. Snarky. Rebellious. And gender fluid. Some days Riley identifies as a boy, and others as a girl. The thing is . . . Riley isn’t exactly out yet. And between starting a new school and having a congressman father running for reelection in uber-conservative Orange County, the pressure—media and otherwise—is building up in Riley’s so-called “normal” life.

On the advice of a therapist, Riley starts an anonymous blog to vent those pent-up feelings and tell the truth of what it’s REALLY like to be a gender-fluid teenager. But just as Riley’s starting to settle in at school—even developing feelings for a mysterious outcast—the blog goes viral, and an unnamed commenter discovers Riley’s real identity, threatening exposure. Riley must make a choice: walk away from what the blog has created—a lifeline, new friends, a cause to believe in—or stand up, come out, and risk everything.

“A rule-breaking, gender-illuminating, pioneering audiobook every library should acquire.”

“Garvin’s novel is one of the first YA books to deal with the complex issue of gender fluidity…Riley’s emotional life and personal growth shed welcome light on a hitherto obscure subject.”

“Jeff Garvin has written a gorgeously crafted story with a complex, fascinating, and intensely real lead who I know will stay with me for a long time. Riley is a character who’s deeply needed in young adult fiction, and this book is a beautiful new addition to the queer YA canon.”

—ROBIN TALLEY, New York Times Bestselling author of Lies We Tell Ourselves and What We Left Behind

“A moving portrayal of what it means to be different, yet the same, all at once. Jeff Garvin has written a beautifully thoughtful book.”

—RENÉE AHDIEH, New York Times Bestselling author of The Wrath and the Dawn