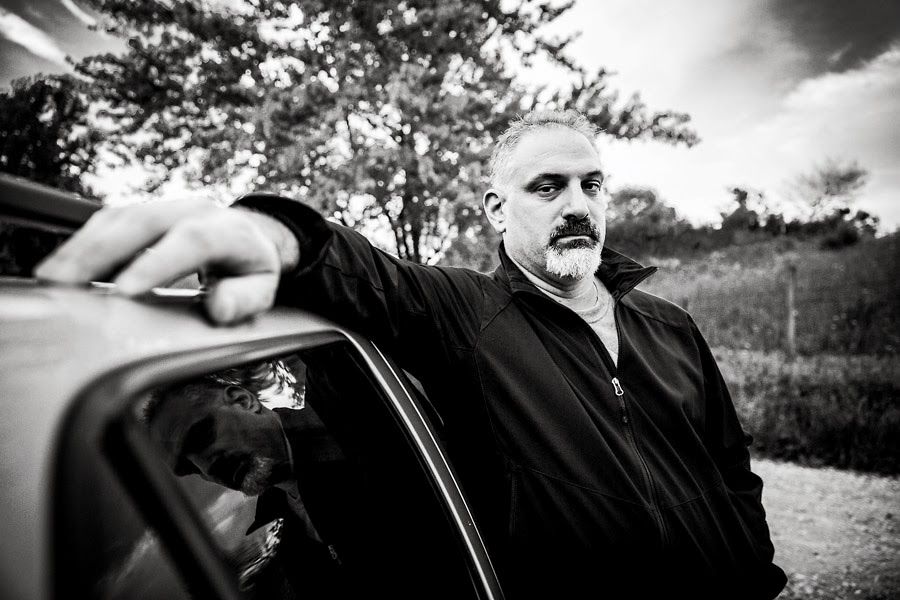 Let’s get this straight right off the bat: I am not a blues fan. Or, at least, I didn’t think I was. And, to make things worse, I experienced Mark Wein’s new blues record, Black Market Hearts, under the worst conditions possible: in my dying car stereo after enduring nine hours of threshold-of-pain sound pressure levels at the NAMM show. So, when I say that I loved it from track one, you can take me at m word. Black Market Hearts is an exceptional album. Three weeks later, the disc hasn’t left my car, and I find myself firing up Spotify to bump “Subterrania” while I’m at the computer.

Right from the get go, Wein lets you know you’re in for an unusual blues record. You think “Can I Take You Home” is going to be another song about getting laid. But Wein ends the line with “…to meet my family,” and instead tells the story of a man desperately seeking his mother’s approval of his fiancee: “And if my mama don’t meet you before/She’ll make our lives a living misery.” This lyrical twist is a perfect analog for the rest of the album, which honors the blues, but does so through Wein’s uniquely modern, suburban lens. “Someone Else’s Fool” is another great lyrical trip, revealing Wein’s subtle pop acumen: “I’ve got questions on my mind/And nothing on my hands but time/All these tears we’ve cried together/I could’ve been any other fool.”

But though Wein’s lyrics are exceptional, a blues record isn’t about words. Black Market Hearts is about feelings and sounds, driven by Wein’s thirsty, soulful vocals and indomitable, star-worthy guitar work. There’s something unassuming about his voice, like he could be the guy at the UPS store, or that dude across the street who lends you his Makita. Then, just when you least expect it, his low tenor gets growly, steeping you in the pain (or the excitement, or the joy) behind his words, and you find yourself turning up the volume.

But Wein is first and foremost a guitar player, and the mouth-watering array of strat and tele tones displayed on this record is the guitar equivalent of a Las Vegas buffet. Every song has its own voice, and there is no “stock” soloing on the album; he treats each track as an individual sonic landscape which must be traversed in its own way. Nor is there any senseless minor pentatonic wanking: just solid, emotional ideas, exceptionally played and dripping with tube-driven, lust-worthy tone. Seriously, the single-coil spank on “Pop” literally activates my salivary glands. Goddamn, it’s good.

Like I said, I’m no blues fan, so I’ve certainly missed out on some of the stylistic subtleties on the record–but I know musicianship, and Black Market Hearts is stuffed with it. The title track features a New Orleans-style groove complete with well-arranged horns and a laid-back, sardonic keyboard solo by Gary Pritchard, whose work on the album is quirky, underplayed and infectious. Martin Torres holds down the low-end on what I can only imagine was a drool-worthy collection of vintage Fender basses. His playing and tone alike are creative, satisfying, and completely unobtrusive. Tyler Walton could play drums on anyone’s record. His sense of time and dynamics is exceptional, particularly on “Someone Else’s Fool,” where he shows you juuuust where the front edge of the beat is with his ride cymbal. I still can’t listen to the last half of that song without leaning slightly forward. I’m doing it now.

My favorite track on the record is the Floydesque “Subterrania (The Prize).” Maybe it’s because inside I’m still a morose sixteen-year-old, but I think it has more to do with Wein’s knack for slightly uncomfortable melodies and Pritchard’s patient, moody organ parts. Regardless, that track, along with the rest of the album, will hold a place of honor in my “Drive Time” playlist for a long time to come.

Last week, I had the exclusive opportunity to grill Mark with questions about his album, his dark past with Felt, and his personal life. The parts of the interview that make us both look good are below.

RPL: You and the boys from Felt released Desert Center in 2002. During the 12-year interim, you’ve managed to open a successful music school, start a burgeoning online guitar forum, publish a book, and father two kids. You must be exhausted.

Oh, right, the question. How has all that life experience changed you as a songwriter?

MW: I’m not sure that the experience has changed me as much as it just gave some space from the artist I thought I was.

I wrote most of Desert Center when I was at a very low point in my life, and lyrically the album was really dark, even on the tunes that sounded lighter. Adam Duritz [of Counting Crows] and Jakob Dylan [of The Wallflowers] were probably my two favorite lyricists at the time and I was really just all about being miserable. Life changes, though, and I haven’t been a miserable bastard for some time.

The problem was that I really couldn’t figure out how to write music that lived up to that album but more properly represented the person I was becoming. It took me a decade to be able to write a song like “Life is Good.” I still try to tell a story with my lyrics, but I’m a little more comfortable both in my own skin and within the confines of the blues structures. And I was old enough to realize that I could write blues music without writing about the blues. You won’t find me singing “I GOT THE BLUES TONIGHT BABY” or any such thing. I wish more contemporary blues artists would do that.

RPL: Why did you decide to make a blues record?

MW: It was the music I was having the most fun playing. I originally decided to do an album because I needed to market my teaching business. For years I had built an online reputation as a YouTube teacher, but no one knew me as an actual “artist” or player, and I wanted to get that out there. I sat down at my kitchen table to write a blues album that I figured we could throw together just so people could hear me play. By the time I had written 20+ songs and worked them out in rehearsal with the band, what I ended up with was something considerably different. Producer Scott Francisco told me to write and record as much music as I could, and that the album would reveal itself to me. I still have half an album’s worth of basic tracks that didn’t make the cut. Maybe someday those tunes will get used for something else. One other thing about the album (this is really stretching your question) is that even though the idea was to make a blues album, I made the decision very early on that it wouldn’t have a ton of songs with the same 12-bar structure and shuffle feel, and that we would stay away from many of the elements that make so many blues albums sound the same. And we got to explore a lot of different territory while working out grooves from other styles of music such as Funk, Rock, New Orleans Second Line, and Country Music.

RPL: You quite literally “got the band back together” to make this record. What was that like?

MW: It was awesome. I’ve known and played with these guys [Producer Scott Francisco, bassist Martin Torres, drummer Tyler Walton, and keyboard player Gary Pritchard] for so many years that it made communication easy. We didn’t need any time to figure out the band dynamic, and these guys are all so proficient at so many styles that I could ask for something simple and they could not only deliver a stock version of whatever it was, but also something that had more of their personality on it. This album would have been radically different had we recorded with any other musicians or any other producer. And I’m pretty sure it wouldn’t have been different in a better way.

RPL: How has teaching guitar influenced you as a player?

MW: Teaching has been great, in that I am forced to play so many styles of music on a daily basis and I’m always needing to learn how to better communicate musical ideas with my students, or with other musicians. I’ve always felt that all musicians should be teachers on some level, even if it’s just sharing some licks with your buddies. Plus, I’m playing with a metronome every day and having to run the basics on a daily basis with my students. It’s definitely healthy for me musically.

RPL: In particular, how has teaching kids affected your approach to guitar?

MW: It’s made me more patient than I used to be. MUCH more patient. Being a parent has also contributed to that. Patience with myself as a musician and a writer–that really helped me work through the writing and collaborating processes for this album.

RPL: You have a full life (see first question for details.) How do you balance family and business while managing to honor your creative fire?

MW: I’ll let you know when I figure that one out. I feel like I’m spinning plates sometimes.

RPL: Who are your lyrical heroes?

MW: As I mentioned earlier, Adam Duritz and Jakob Dylan. Johnny Cash was another. Dave Grohl. I went through a big Ani Difranco phase at one point. For blues, I dig a lot of Willie Dixon’s songs. Sonny Boy Williamson and even Robert Johnson. The guys who told stories with their songs.

RPL: Who are your guitar heroes?

RPL: Was a blues version of “Falling Dream” on the outtake list?

MW: Actually, it hadn’t crossed my mind. Now I need to figure out how to do that…that song was a complete fluke on that album, too. What’s on the CD was just me showing the guys an idea I had, and it turned into the album opener. My one, only (and most likely last) recorded piano performance.

RPL: What’s next for you, musically?

MW: I like what I’m doing right now quite a bit, actually. I want to play this music out a bunch and write more and hopefully in the next year start the follow up to Black Market Hearts.

Mark Wein gigs, records, and runs Premier Music in Orange, California, where he also lives with his wife and two kids.