HarperCollins To Publish My Debut Novel

Book by Fortuna on DeviantART

AFTER THREE WEEKS OF SITTING on this news, I have gnawed my fingernails to the quick and chewed through most of the pen caps in the house. Yesterday, I even caught myself staring longingly at my dog’s rawhide bone. (Luckily, I remembered it wasn’t vegan.) But now I can finally go public!

The following is an excerpt from the official announcement in Publisher’s Weekly:

Kristin Daly Rens at HarperCollins imprint Balzer + Bray has acquired North American rights to Jeff Garvin’s SYMPTOMS OF BEING HUMAN, a debut novel about Riley, a 16-year-old gender fluid teen who starts an anonymous blog to deal with hostility from classmates and tension at home. But when the blog goes viral, a storm of media attention threatens Riley’s anonymity. Winter 2016 is the projected pub date; Rachel Ekstrom at the Irene Goodman Literary Agency negotiated the pre-empt for two books.

I was in a meeting at work when I glanced down at my vibrating cellphone to see my agent’s name on the display; but my boss and I were just digging into a four-page spreadsheet and I couldn’t walk out. I had to wait forty-five minutes before bursting out of the building and running to my car. I drove around the block, pulled to the curb, and called my agent.

She was walking in Manhattan, her voice all but drowned out by a passing horde of emergency vehicles. When I finally understood the words “we sold your book,” we both screamed. Okay, I screamed. I don’t know if she screamed; I couldn’t hear her voice because of all the screaming. It was a tremendous, almost Seussian “squee-ing” noise which briefly overwhelmed not only the speakers in both our phones, but likely the entire Verizon network. So, it was all very dignified.

The offer came in eight days after we submitted the manuscript, and it’s worth noting that the deal went down during the chaos of Book Expo America (BEA), one of the largest annual book conferences in North America. This kind of speed, especially during such a hectic week, speaks to the vision of the editor (Kristin Daly Rens) and the imprint. It also demonstrates the epic agenting skills of one Rachel Ekstrom, who managed to put this deal together during one of the busiest weeks of her year while also managing to keep me from completely losing my mind.

After we hung up, I called my parents and a few writer friends. There was more squealing. When I got home, I celebrated with my amazing wife, who has endured this roller coaster ride with all the grace and humor of a modern-day princess. As she so aptly put it: “It’s an adventure.”

I have never felt so validated and supported. On the one hand, the creative road that brought me here has been long and twisted–and, on the other, my writing life has only just begun.

I can’t wait for you all to read this book. 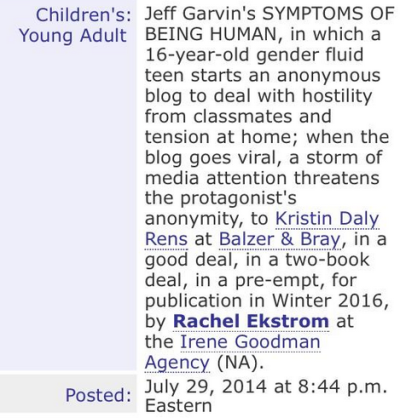