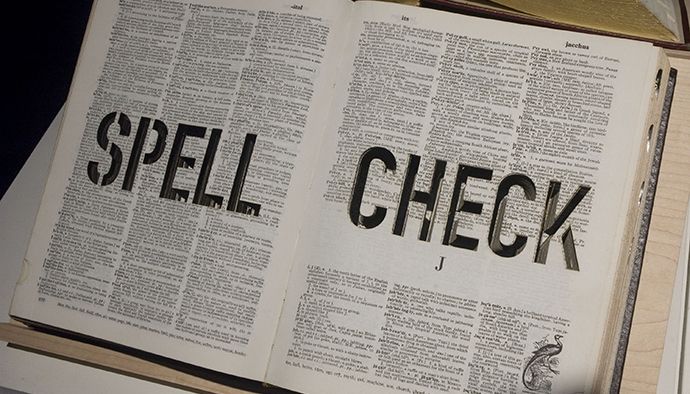 How Spell Check Tried To Sabotage My Novel

On Sunday night, I was almost ready to turn in the second draft of my debut novel, SYMPTOMS OF BEING HUMAN.

While I was rewriting, I kept thinking of how I might share the process with you, my dear reader. I have always enjoyed the commentary tracks and blooper reels on my favorite DVDs, and I wanted to provide something like that. But the truth is, novel writing is not much of a spectator sport. (Though Monty Python made a funny go of it.) Novel writing mostly consists of sitting at a computer and trying to resist the tractor beam pull of the internet.

So, as I was coming to the last few hours of work, I gave up trying to conceive some fascinating angle on the revision process–and then I did my final spell check.

I don’t know if you’ve ever spell checked a 350+ page document, but it is a trying, emotionally challenging process. You learn about technology, and fear, but mostly, you learn about yourself. At first, I thought some of the things that spell check caught were pretty amusing–but after a while, a distinct pattern emerged, and I was forced to realize that spell check and its nefarious cousin, grammar check, were intentionally trying to sabotage my novel. I took screenshots as proof, and I’ll share them with you now, along with my thoughts. 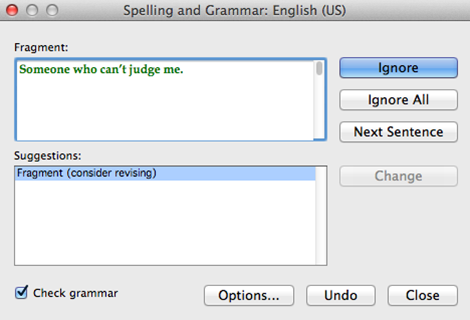 And yet, you are judging me. Look. Sentence fragments are a stylistic choice. Everyone knows that. Stop. 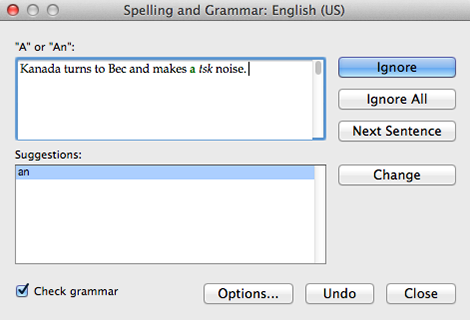 There aren’t even any vowels in “tsk”. I’m not stupid. I see what you’re doing. 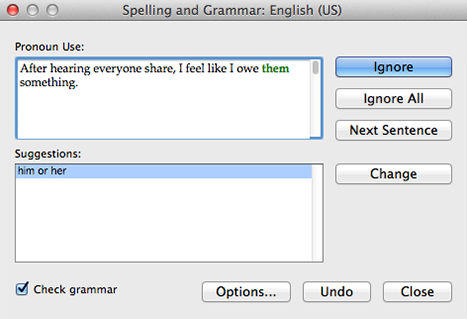 Okay, sure. “him or her” is technically correct. But this is narration by a sixteen-year-old, and besides, nobody talks that way…wait a minute. You’ve read the whole book. You know that gender identity plays a central part in the novel. You’re being gender binary on purpose, trying to KILL MY BOOK. I won’t let you. 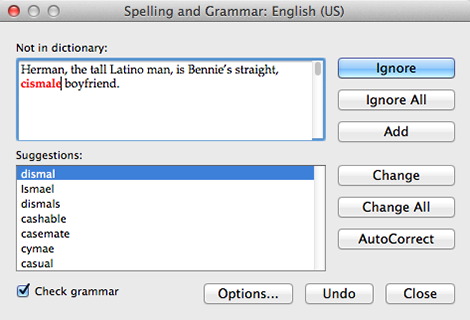 Now you’re suddenly pretending to be on the other side of the issue? I see what you’re up to. 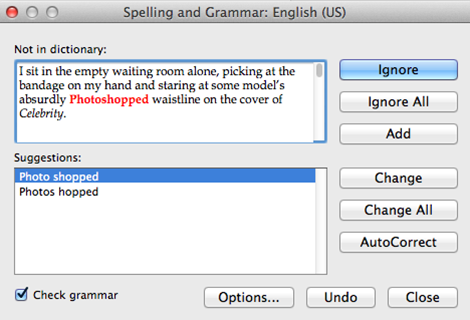 I think we both know that “Photoshopped” is a completely legitimate adjective. I even capitalized it. So now, in addition to your gender bias, you’re promoting the oppression of women by media companies who set unrealistic body image expectations. 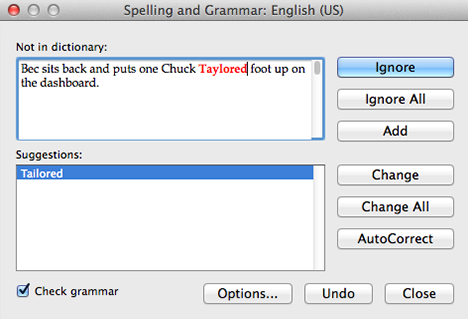 Speaking of legit adjectives: Chuck Taylored. I could have said “Conversed,” but that would have been confusing because of the double meaning. So now you’re blatantly trying to erode my style. Perhaps Microsoft owns a share in some other major footwear company? I wouldn’t be surprised. 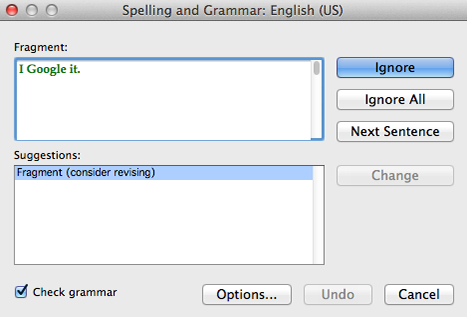 Ha! I bet if I had typed “I Bing it,” you would have breezed right past this one. No corporate overlord can tell me how to write my book. (Except the sensitive, brilliant, charitable people at HarperCollins.) 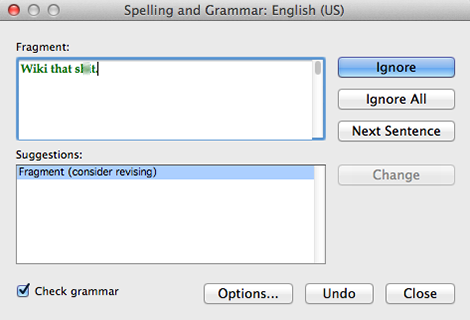 How is this a fragment? “Wiki” is yet another modern verb, forming the predicate, and “that sh#%” is clearly the subject. Complete sentence. Boom. 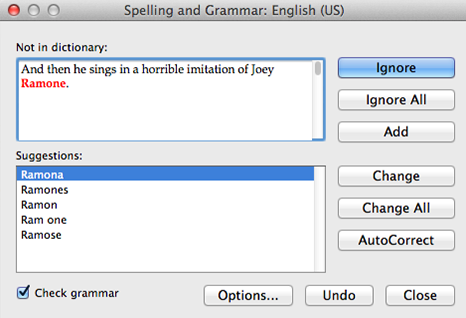 You’re telling me you don’t know who JOEY EFFING RAMONE is?! Bono just wrote a song about him. It’s already in your damn iTunes library. Stupid machine.

Wait. You don’t know CHEWBACCA? You were coded by geeks. I can’t even. 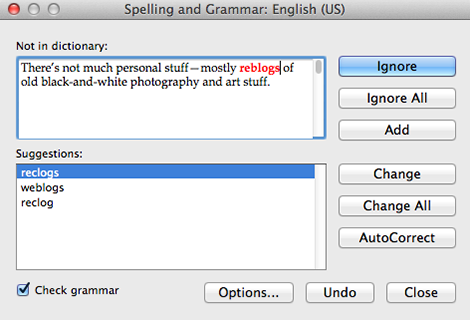 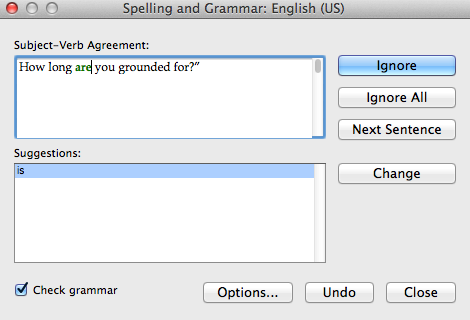 Now you’re just effing with me on purpose. Trying to break my mind. IT WON’T WORK 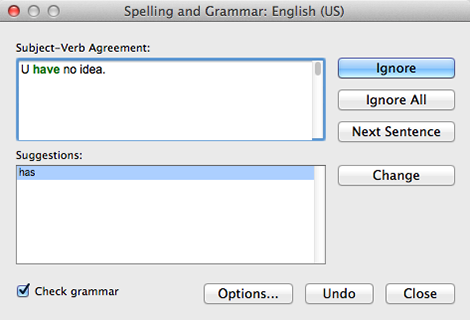 Wait. You speak Lolcat? No. You’re trying to lure me into a false sense of security. I won’t let you. 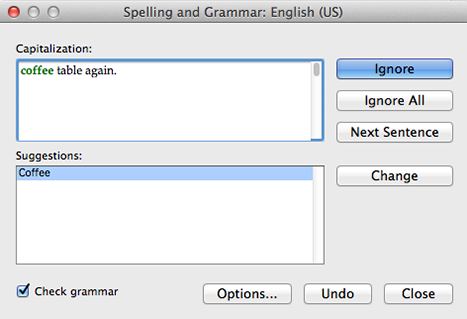 How did you know about my campaign to make Coffee a proper noun? Have you been reading my email? Or, could this be a genuine attempt at friendship? Some kind of olive branch? If it is, I’m really sorry about all those things I said. Maybe we can move past this. I’ll take you to a Starbucks. I’ll let you spell check my next blog post. 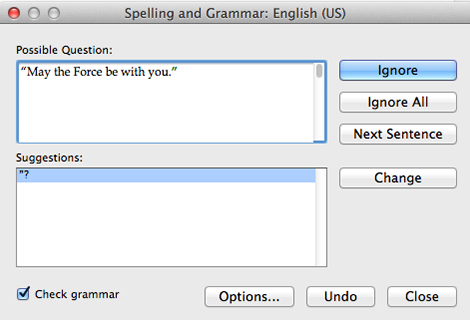 I hate you so much.