6 Steps to Creative Fulfillment in 2013 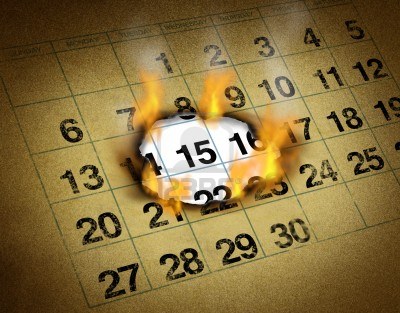 I much prefer October. Yup, October is the sweet spot; I’ve spent nine months building up momentum! Whatever’s going to happen during this year is already set in motion. By the time I’m done lamenting letting another Halloween go by without dressing up like Obi-Wan, it’s Thanksgiving – and by then, I’m caught in the Christmas tractor beam and December flashes by like stars during the jump to light speed. And then, POW! It’s next year.

But January? Eff January. I’m back at the bottom of the hill, getting ready to push that boulder up ONE. MORE. TIME. I’ve shared this sentiment with my wife – but she went straight from high school to college to teaching, so she’s never stopped living by the academic calendar. Remember that? So simple. So glorious. You dreaded September and longed for June and that was it. Because of the Earth’s seasonal relationship to the sun, the last six weeks of school took roughly nine years to pass, while the eight weeks of summer lasted precisely four days. Ah, the academic year. I loved and hated it, but it was always there for me.

As a creative person, I’ve learned to make my own structure. I define success and failure, and the only deadlines I have are the ones I set for myself. Sound exhausting? It is. But it’s also powerful and exciting. After years of working part time as an actor, touring with my band, and now writing fiction in my off-hours, I’ve developed a system for managing my creative life so the years don’t slip by and fade into woulda-coulda-shoulda-land. I’ll share the bones of that system with you now.

1. Set an achievable big-picture goal for the year
For me, this might be “draft a novel” or “perform a live acoustic solo show.” The goal needs to be big enough to scare you juuust a little, and general enough that it makes you wonder more than it makes you worry. This kind of goal serves to inspire you, to light the burner under your imagination and start things cooking.

2. Define and Decide
You need a plan. Your plan should consist of two parts: define success and decide when you’re going to do the actual work. The success part is easy – how do you know when you’ve won the game? I might decide my novel will be finished when I’ve written 50,000 words that include a beginning, a middle and an end. It’s that simple! For your marathon, you might decide that all you need to do is cross that finish line. Perfect.

Now – when are you going to do this thing? Technically, you’ve got twelve months – but I give myself eleven. I want to be done with whatever it is by November 30th. If I stay on track, I’ve got a month-long holiday to look forward to; if not, I’ve got a 30-day buffer. (This has saved me more than once.)

Break up your task into digestible chunks. Register for that marathon six months in advance. You have created your first deadline. Then, buy a book like The 13 Week Run/Walk Program and follow the schedule. Now it’s not an impossible 26-mile monster, but a one-week-at-a-time training process that you can handle. On the creative front, setting a daily word-count goal works for a lot of writers: “I won’t stop until I hit 1500 words!” If that works for you, go for it. I’ve discovered that, after a full work day, I’ve got about two hours of productive creative time before my brain starts to turn to jello – so I set a time-oriented goal of 2 hours per day on the weekdays.

3. Get an accountability partner
I have a weekly phone call with a writer friend. We make commitments to each other, such as “I’ll have ten pages by next week,” or “I’ll have a rough pitch completed by Thursday.” Half the time, we fail each other; but the other half, we keep our promises to one another. If you make 50 promises this year and fail at half, you’ve fulfilled 25 commitments you wouldn’t have otherwise made. Want to run a marathon this year? Join a running club. Enroll a friend and do the 13-week run/walk program. Get someone else involved and make it about them.

4. Set Benchmarks and Reward Yourself
Use a little classic reinforcement and psych yourself into succeeding. When you hit that 10,000 word mark, go buy yourself something pretty. It doesn’t have to be big: a new case for your phone. A cheap pad-folio for your legal pads. One of those goofy reflective slap-bracelets that ravers runners love.

Since I’m a slave to narrative, I recommend setting three bench marks. When you cross that finish line, do something big. When my buddy and I finished the first drafts of our novels in 2011, we went out for a ridiculously expensive glass of scotch. We still talk about it. Do something Instagram-worthy. As my wife says, “If it’s not in the scrapbook, it didn’t happen.” Make a fleeping memory, will you?

5. Value Ritual
Athletes have an advantage in this regard; they lace up their shoes, stretch, and warm up the same way before every practice session. Creative people tend to jump into the pool with cold muscles. Creative people: start valuing ritual! Before each writing session, I read this incantation and take three deep breaths of peppermint oil to sharpen my mind. You’re an artist. Get weird.

6. Ask “What’s Next?”
Human beings have difficulty with beginnings and endings. Perhaps it’s all a big metaphor for the pain of childbirth and our fear of death; regardless, if you’re like me, you need to plan ahead to manage the crazy between projects. Runners: sign up for that next race, but make it a 5k. About the time I’m rounding the bend into Act III, I have a running list of short story ideas going on my phone. Most of them are terrible (I just glanced at the last two I jotted: “Bass Player hits head on tour and becomes psychic” and “Murder at a Vegan Hippie Compound”), but the act of creating that list will align your heart with the foreign idea that this creative life has a strong, steady through-line. Start letting that next project form in your mind, and when you type “The End” or cross that finish line, you won’t drop into that postpartum depression that plagues actors between shows.

Apply these six steps and 2013 will be the most satisfying creative year of your life. I practically guarantee it. If you’re looking for more inspiration, I highly recommend The War of Art by Steven Pressfield. And if you want to take my marathon analogy seriously, check out The Beginning Runner’s Handbook: The Proven 13-Week RunWalk Program by Ian MacNeill.

I’ll be waiting at the finish line with a ridiculously expensive glass of scotch.