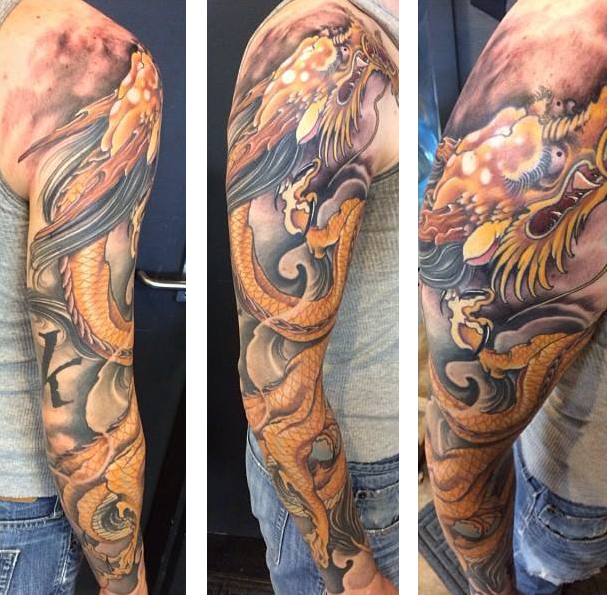 Getting tattooed fleeping hurts. But pain isn’t always a bad thing; if tattoos were easy, we’d all be walking around with the names of embarrassing bands or nasty ex-lovers indelibly etched in uncomfortable places.

Pain is an important part of the process. Pain makes you think. I recently completed a full sleeve dragon tattoo that took four full-day sessions to complete–almost 24 hours in the chair. During the process, I had a lot of time to think about why I was doing it. Here’s what I discovered.

The relationship between a tattooist and his subject is about as close as the average citizen can get to the artist/patron paradigm that prevailed prior to the ubiquity of mass media. The twist is that the person getting the tattoo is both patron and canvas. That is a singular experience, unlike any other in modern American life, and I simply had to have it.

THE PRO AND CON

After finishing my dragon sleeve last month, my tattoo artist, Tim McEvoy, invited me to attend Tattoo Magazine’s Inxtravaganza Convention to participate in my first tattoo contest. The convention itself was smaller than I expected, filling about half of Anaheim Convention Center’s Hall E with booths representing by tattoo studios, t-shirt companies, or industry vendors who sell supplies like ink and tattoo guns.

My favorite thing about the con was how friendly and interested everyone was. I could hardly walk ten feet with someone tapping me on the shoulder, asking to see my sleeve. Some were diminutive white guys like me sporting Celtic knots or roaring tigers, others were big burly latino dudes with spectacular portraits of lost family members on their scalps. On the street, we might never have spoken, but at the con, we had undeniable common ground.

Around 5 PM I joined the queue of tattooed people waiting to be judged for the contest; it was like standing in a living art gallery. The woman next to me looked like a junior high school principal from the chin up–but below her clavicle, every inch was covered in gorgeous, vivid ink–a lifetime of tattoos. Next to me, a muscular Asian guy a few years younger stood waiting to show a spectacular Japanese mask piece that covered his entire back. I used to feel intimidated or out-of-place among people who had so much ink; but now I felt like one of them. It was pretty amazing.

The panel of judges was packed with famous tattoo artists, including L.A. Ink celebrity Corey Miller. I even had to walk on stage like some sort of middle-aged punk contestant on America’s Next Top Pale Guy while a commentator described my sleeve to the crowd. 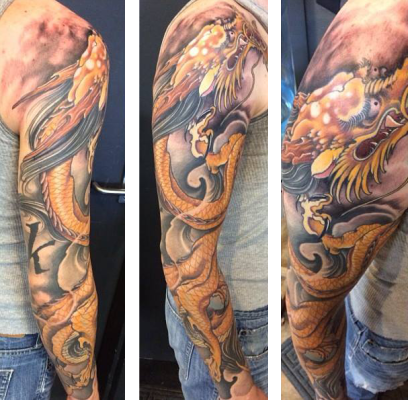 I woke the next morning to a text message from Tim saying “We won best sleeve buddy! Thank you for your support.” I thought, wow. I didn’t just buy decoration with my time and money; I contributed to small business (Art Junkies in Hesperia) and provided four days of work for a talented artist (Tim McEvoy); but the most satisfying part, other than walking away with an award-winning arm, was that I created an opportunity for someone else’s self-expression. I can only imagine how long a tattoo artist has to work to get an opportunity to express himself they way he wants to, with ink on skin. It was amazing to be a part of that.