How and Why I Started Writing

I scrawled my first lyric—a future hit entitled “Dart Heart”—into my Hello Kitty Diary at age eight-and-a-half. There were photos of me at a younger age that foretold my becoming a musician (see above), but I think “Dart Hart” was the first evidence that I might end up a writer.

At eight-and-a-half, however, I wasn’t much of a finisher, because after filling up 20 pages of the diary, I abandoned it.

It wasn’t until junior high that the writing bug really got me. Miss Burns, my seventh grade Language Arts teacher, used to give us “free writing” time, a solid forty-five minute chunk of quiet during which our only mission was to keep writing. By the end of the year, I had a small portfolio of verse and short stories. I was very proud of it.

In high school, I wrote dark poetry about depression and unrequited love. I even got published in the National Library of Poetry’s undistinguished volume Edge of Twilight alongside several thousand other kids whose parents had $49.95 to spend on the oversized, under-edited volume, which I later used to flatten straws for art projects. 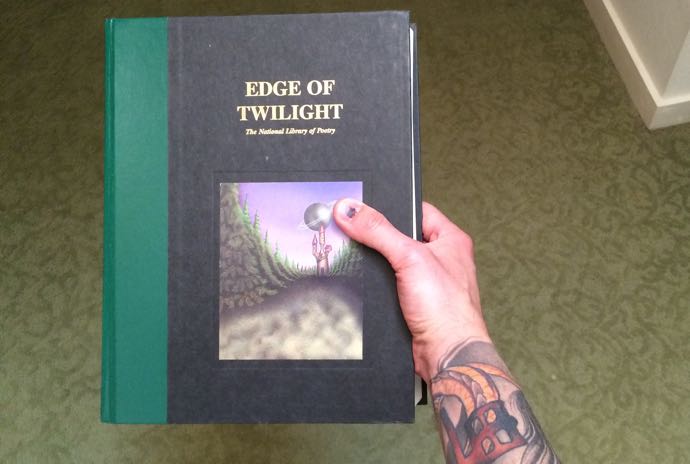 During my junior year, I escaped my typical suburban high school to study at an arts magnet in Los Angeles. Mr. Barrata, my junior year English teacher, assigned a short story. Mine was called Just Another Day (after the Oingo Boingo song of the same title), and featured an angry teen who kills his the abusive, older boyfriend of the girl he’s in love with. It was short on character, long on drama, and employed bouts of painfully cliché dialogue. In short, I loved it. I think I got a B.

I did write a few short films in college, but only so I could star in them (and write the soundtracks.) I wanted to be Cameron Crowe or John Hughes. I still do. I even wrote a feature screenplay, which I hoped would turn out to be a sort of Stand By Me meets Thelma and Louise. (It didn’t. Trust me.)

But screw writing; I was going to be a rock star or a famous actor. Something that involved loads of adoration from millions of strangers. Maybe that could fill the seemingly insatiable yawning maw inside me. So, I got an agent, did some TV, and started a band. And then, after eight years, three albums, and two national tours, it was time to call it quits and reinvent myself. So I did NaNoWriMo (in April, because @#$% the rules) and I’ve never looked back.

(For more detail, including my disastrous first novel attempt and the death of my dream of being an astronaut, check out my first ever blog post.)

Creative people—whether we act, play flugelhorn, make sculptures, or write novels—have a pilot light inside us that refuses to go out. (Thank you Barbara Deutsch for this beautiful metaphor.) We have to honor that flame, or it will consume us: meaning that, if we don’t pursue some creative activity on a regular basis and for its own sake, we are likely to succumb to addiction, mood disorders, strange illnesses, wrecked relationships, and so on. There is no greater human force than creativity, except perhaps its destructive shadow, Resistance. Writing is therapy and self-discovery. It’s a way for me to get to know myself—and even when I expose the darker, more unexpressed parts of myself, I’m surprised at how many readers identify with those elements. The more I write—and the more people read and respond—the more I realize that my weirdness seems to be everyone’s else’s weirdness. If there’s an altruistic bent to my writing, it’s this: making fellow weirdoes feel less alone.