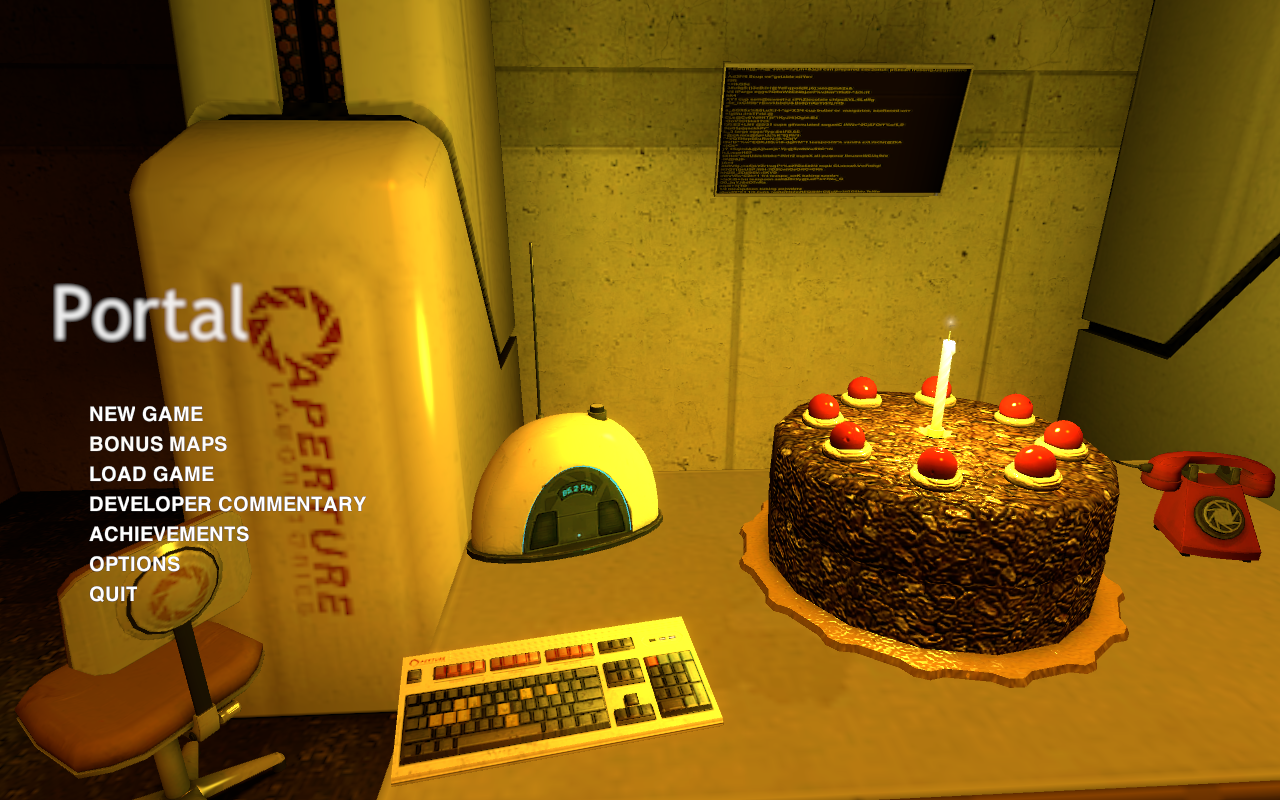 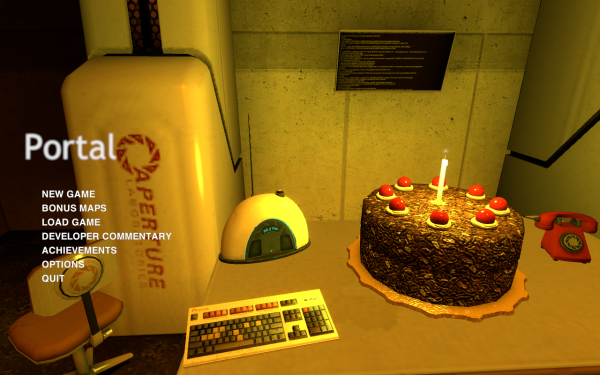 Once upon a time, I was a geek: a Firefly-watching, comic book-reading, d12-wielding geek. And then, something happened.

I have this group of amazing friends. Every time I’ve scored a walk-on part on a sitcom, they’ve come to watch. Whenever my band played, even in the most sticky-floored dive bar in our town, they showed up with friends and paid the cover. When I started writing, they read my early chapters and gave me encouraging feedback. And, when we get together to play D&D or Cards Against Humanity, or just sit around and enjoy each other’s company, they TAUNT ME MERCILESSLY. They call it “keeping my ego in check,” but this has been going on since junior high—long before there was any ego to speak of.

For the last few years in particular, they’ve been ribbing me for not being in touch enough with geek culture. That’s right—now I can’t even hang out with the geeks because I’m not geeky enough.

Enter: Portal. For the uninitiated (which included me, until last week), Portal is a brilliantly original first-person puzzle game by Valve Software, in which you, the main character, try to foil an evil supercomputer and escape from the labyrinthine research lab of nefarious super-corporation Aperture Science. The game is full of mind-bending, physics-warping puzzles—but what endears it to geeks is its unique brand of post-Kubrickian humor, the likes of which I’ve experienced nowhere else. It even has a closing credits theme song by geek-rock giant Jonathan Coulton (the knowledge of whom I also have my friends to thank for.)

Anyway. There’s a hard-to-explain running joke in the game that involves cake; and, one night during D&D, while I was attempting to appear as though I was in on said running joke, I perpetrated an unforgivable gaffe: I made an off-hand remark about “The PIE song.” Not the cake song. The Pie Song.

The looks I earned burned holes in my skull. I have never felt such concentrated beams of unadulterated scorn—and it got me thinking. When did I stop getting the inside jokes? When did I stop recognizing the characters on my friends’ t-shirts? Sure, I know the incantation Luna Lovegood uses to fix Harry Potter’s nose in OOTP, but HP is so…. mainstream. When did I lose touch with Real Geek Culture?

Cut to last Sunday: I finish the second draft of my forthcoming novel. For the following week—this week—my therapist forbids me to write (I’m breaking that rule by blogging now), read, or have anything to do with words. It’s a sort of forced hiatus, you know, to keep me sane. So, naturally, before I even cross the parking lot, I’m already going insane. So, when I get home, I get online, download Steam, and buy Portal—only to discover it was released in 2007.  TWO THOUSAND SEVEN? SIX YEARS AGO? That’s half again as long as fleeping HIGH SCHOOL!? How did I think this was current? How had I managed to get so far behind? I started to do the math.

I’ve been writing fairly nonstop on this project since Feb 2012. Before that, I was working on a never-to-see-the-light-of-day fiction project, which began in August of 2011. In April of that same year, I was finishing my first novel, and prior to that I was recovering from the life-changing break-up of my band, 7k, in February. The year before that, 2010, marked 7k’s second US tour and the recovery from our first, the prep for which took most of 2009. 2008 was all about recording and mixing our album, and 2007 was packed with shows and writing. So, basically, since Portal was released in 2007, I have had 3 different full-time jobs, toured the US twice, released an album, and written three novels.

An impressive list, I told myself, in a comforting, slightly pompous, Percy Weasley sort of voice. A list that certainly justifies having missed every Joss Whedon project post-Firefly. A list that excuses me from still not understanding the grappling rules in D&D 3.5. But, the list, which I worked very hard to string together for the purpose of this blog post, sounds awfully like a load of excuses; because somehow I’ve still managed to watch Breaking Bad and catch up on The West Wing and read like a madman.

The truth his, I put myself in this fleeping time capsule—either as a punishment for some perceived failure to achieve, or as some kind of self-righteous badge of distinction: “I’m too busy to relate to all of you.”

NOW, IS THAT GRATITUDE?

In the end, Portal is just a videogame. But, like many works of creative genius, it had a much bigger impact on me than a few measly hours of entertainment. It was a doorway to my reconnection with so many things I’ve loved. It was the threshold of my re-initiation into geek culture.

So, I owe my friends a debt of gratitude—thank you, not only for keeping my ego in check with your merciless taunting, but for reminding me that I can’t create a relevant, addictive world in my own work if I’m not passionately pursuing the creations of others with the same fervor I hope to inspire in my future fans.

Thank you, my friends, for my re-initiation. I’m thinking of having a Robotech marathon this weekend. You’re all invited over for cake.

My inner geek is still alive.